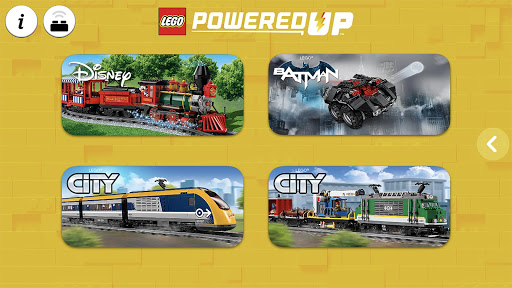 LEGO® POWERED UP MOD Description: Combine this app with the LEGO DC Super Heroes App-Controlled Batmobile (76112), the LEGO City Cargo Train (60198), or the LEGO City Passenger Train (60197) (each sold separately) to operate the motorized engines via Bluetooth controls, or use your imagination and build entirely new creations using LEGO Powered Up components and bring them to life by coding them. Make your models move and respond to real-world events.

The LEGO Powered Up app puts you in the driver’s seat of the awesome 4-wheel-drive Batmobile to speed through the streets of GOTHAM CITY™. Drive forwards, backwards, left and right… or pull 360-degree turns! You can even activate cool tricks and stunts as you become the Dark Knight and fight crime. You can customize and code your Batmobile tricks and choose your sounds and movements – pretty awesome!

The LEGO Powered Up app also controls LEGO trains to haul goods or pick up passengers around LEGO City. You can control the speed, change directions, and bring even more life to your play with various sounds such as a whistle, passenger announcement, railroad crossing bell, and more! The Bluetooth remote control app and the remote control handset included in the LEGO City train sets aren’t compatible with older infrared remote-controlled LEGO train sets.

If you are into trains, the LEGO® Powered Up app just got an exciting new update. With the brand-new LEGO@ Disney Train controller you can control the train, play steam whistle and bell sounds, and stop at the iconic train station to welcome more passengers on board.Additionally, we have added custom LEGO® Disney Train background music for a summer and a winter theme setting the stage for any train adventure you can imagine.