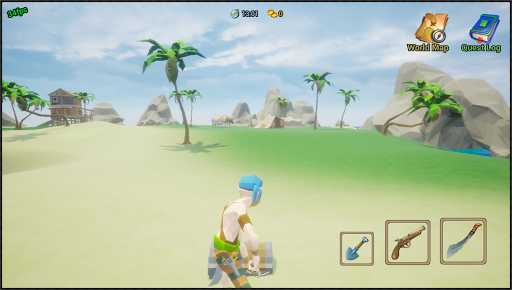 Designed and optimised specifically for Mobiles and Tablets.

This game is currently BETA “early access” and still in development, with regular updates released every week or two.

This game is Indie developed – I have a full time job and work on this project in my free time, as a hobby and passion for the enjoyment it brings to others.

In-App Purchases: I’ve added a single “upgrade” to unlock premium content but not to restrict non-premium players too much, eitherway the game is fully playable and the cost to upgrade is minimal.

Thank you very much to those who upgrade to Premium, it helps so much and allows me to develop the game more, it really does make a difference.New Island: Strong Hold.
Islands moved closer to each other.
Added sailing speed boost when chasing other ships (catch up/slipstream).
AI ship logic improved and uses catch up speed boost.
Fixed recover to nearest port when no port nearby, defaults to shanty bay.
Water particle brightness changes with global brightness.
Removed sand foot step particles.